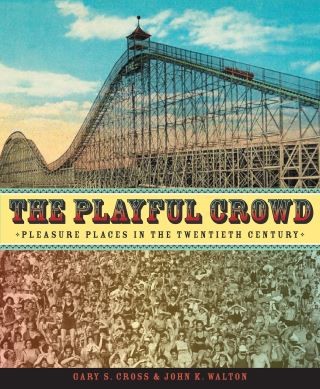 Pleasure Places in the Twentieth Century

During the first part of the twentieth century thousands of working-class New Yorkers flocked to Coney Island in search of a release from their workaday lives and the values of bourgeois society. On the other side of the Atlantic, British workers headed off to the beach resort of Blackpool for entertainment and relaxation. However, by the middle of the century, a new type of park began to emerge, providing well-ordered, squeaky-clean, and carefully orchestrated corporate entertainment. Contrasting the experiences of Coney Island and Blackpool with those of Disneyland and Beamish, Gary S. Cross and John K. Walton explore playful crowds and the pursuit of pleasure in the twentieth century to offer a transatlantic perspective on changing ideas about leisure, class, and mass culture.

Blackpool and Coney Island were the definitive playgrounds of the industrial working class. Teeming crowds partook of a gritty vulgarity that offered a variety of pleasures and thrills from roller coaster rides and freak shows to dance halls and dioramas of exotic locales. Responding to the new money and mobility of the working class, the purveyors of Coney Island and Blackpool offered the playful crowd an "industrial saturnalia."Cross and Walton capture the sights and sounds of Blackpool and Coney Island and consider how these "Sodoms by the sea" flouted the social and cultural status quo. The authors also examine the resorts' very different fates as Coney Island has now become a mere shadow of its former self while Blackpool continues to lure visitors and offer new attractions.

The authors also explore the experiences offered at Disneyland and Beamish, a heritage park that celebrates Britain's industrial and social history. While both parks borrowed elements from their predecessors, they also adapted to the longings and concerns of postwar consumer culture. Appealing to middle-class families, Disney provided crowds a chance to indulge in child-like innocence and a nostalgia for a simpler time. At Beamish, crowds gathered to find an escape from the fragmented and hedonistic life of modern society in a reconstructed realm of the past where local traditions and nature prevail.